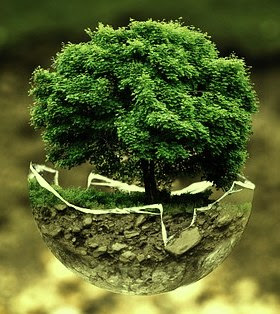 Answer - 1 - The word environment is derived from the English word "ENVIRONMENT". In simple words, it means that all the things that come under the environment are directly surrounded by a place.

As we know, man is completely influenced by the environment around him, and he also influences his environment.

The composition of our environment is especially important for air, water, soil, plants, animals etc. Because without them we can't even imagine our surroundings.

According to dr. Deris - "With regard to man, the geographical environment refers to all the physical forms scattered over the earth or man, the forms in which he lives, which influence his habits and actions."

According to Sorokin - "The geographical environment refers to conditions that are completely independent or separate from human actions, in other words that are not made by humans and that change automatically."

(ii) The environment is of the following two types.

(1) Natural environment - Physical environment refers to an environment that includes all the elements that have a direct impact on humans. Such as sun, earth, air, water, fire and all its activities, which have direct and indirect consequences for man.

In which - different types of actions are included under the sun's heat, the earth's movements, gravity, volcanoes, etc.

Question-2 - What steps should be taken to raise public awareness in society for the environment? Give your suggestions.

As we know today, the problems associated with the environment in the world have taken on a formidable form. There are many reasons for this, but today we discuss all the reasons that are most important.

(i) Population growth - Population growth has become a major problem today. As a result, while the availability of resources per person on the one hand, on the other hand, there is a direct or indirect effect on nature. Increasing population is not only a natural problem, but also - economic problem, social problems have also become.

We use nature constantly, day in and day out, because we are motivated by its rapid profits, not by its far-reaching consequences. If this trend continues, the day is not over that the existence of all of human civilization will be in danger.

(2) Next steps must be taken to raise public awareness in society for the environment.

- To raise public awareness in the area, different types of visual and audio sources must be used.

We can use different types of instruments below, and the need is: how effective are our efforts.

The society in which we use these tools, whether effective for society or not, is also very important.

With the author's pen ✎ - Population growth has become a major problem for the world and India, taking on a huge shape day in and day out. Through which we invite different kinds of economic, social and environmental problems. . Even though we are working on "one child policy", the matter has gone much further. In other words, it is such a high-speed vehicle that even if the brakes are applied now, no one knows how many decades this vehicle will stop.

But it is the thought that why no concrete steps have been taken in this country so far.


Ecology and Environment - "ALL PARTS"